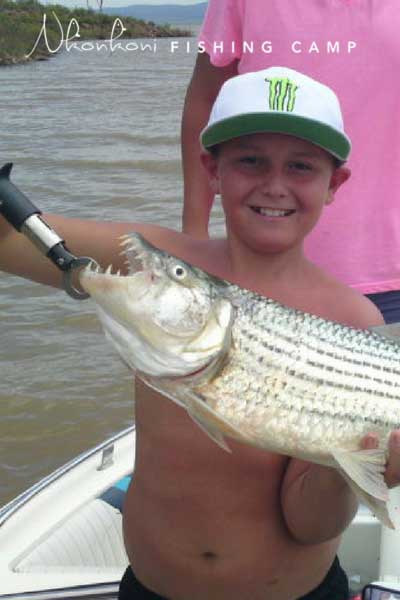 At the moment you can use bait such as sardines, chicken hearts and livers, but I would say that sardines have proved to be the best. The line must be about 18 lbs which affords you the opportunity of catching 5kg’s or more. Make sure that once you catch the fish the line is loosened so that if the fish pulls it must be free to run and the tip of the rod should point down. Let them run for 3 seconds and close the bail arm, which should allow you to catch it.

The Pongolapoort Dam also known as Jozini is situated in the North Eastern part of Kwa-Zulu Natal, bordering Southern Swaziland. It is the southern most extremity of the infamous Tiger Fish population due to our hot summer temperatures and moderate winter climate and is the only waters in South Africa home to the tiger fish.

The dam covers +/- 16 000 hectares, with a river stretch of approximately 5 km.  It is set against the backdrop of the Lebombo Mountain range, giving the eastern shores deep basaltic drop-offs ideal for tiger fish.  The “Poort” or Gorge is a 7 km stretch leading to the dam wall, with crystal clear waters of 60 meters deep and  cliffs with overhanging  cycads.  The western shore are mainly mud flats with the odd underwater islands ideal for breeding baitfish including two species of tilapia, catfish, carp, mudfish and a large variety of smaller fish.  The Phongolo River feeds the dam and this stretch is made up of both of the above conditions, with the old submerged trees making up most of the tiger fish hideouts.  The northern tip stretches into Swaziland itself however we are not permitted to fish here.  The other area fishing is prohibited, is from the railway bridge upstream which is a breeding sanctuary area.  Fishing takes place from boats as the shoreline is crowded with semi-submerged trees and not to mention the large population of hippos and crocodiles in the water.

The tiger or striped water dog occurs in all rivers flowing eastwards in most of Africa so they have occurred here naturally for centuries.  The tiger fish population here is ever growing with decent specimens only starting to appear in the early nineties.  A record specimen was caught in 1998 weighing 8.3kg and some in the 5 – 7kg ranges are still being caught.  Average size is still under a kilo and specimens up to 4kg are quite possible in a 3 day fishing trip.

One never tires trying to tackle the tiger, be it the hard bony jaws, big teeth, sheer cunningness or remote areas.  Their fantastic skill to bite through a lure/bait is what makes them such an exciting fish to catch.  An average of 4:1 is expected when fishing for tigers.  They attack from the side, then turn the bait around and swallow it headfirst.  Tiger fish have 20 conical teeth that are extremely sharp and covered with an anticoagulant.  Whole sets of teeth are continually replaced during their lifetime.  On average they gain 1 kg a year and their life span is about 8 years.

The tigerfish is a fierce and wily creature that demands respect from all forms of life that may happen across its path and is regarded by majority as being the best freshwater game fish in Africa. In this page you will find: the description, distribution & Habitat, general behavior, breeding patterns, lifecycles and a look at the feeding habits of the tigerfish of the upper Zambezi.

The tigerfish is best described by its Latin scientific name Hydrocynus vittatus which when translated means “Striped Water dog” – a most fitting description indeed.

The tigerfish has a blue-silver fusiform shaped body with red & yellow pointed fins which have black trailing edges. The head is large with extremely bony cheeks and jaws. The 8 teeth per jaw are conical & extremely sharp and are used more for grasping prey than tearing bits of flesh from it. These teeth are replaced at intervals throughout the tigerfish’s life. Males and females are similar in form and coloring but males are generally smaller reaching +_ 500mm at maturity while the females are much larger reaching over 700mm at maturity. Tigerfish Found in the fast flowing waters of the Upper Zambezi can reach 10kg in weight.

The tigerfish is found mostly in the warmer, well oxygenated fresh waters ofSouthern Africa and are most abundant in the Zambezi, Okavango and Pongola river systems.  Tigerfish are also found in the Congo River, Lake Tanganyika and some other North and West Africa river systems.

The tigerfish is an aggressive predator that relies on other fish as its staple diet for most of its life. Only when the tigerfish is really young does it feed on small insects, crustaceans and plankton. The tigerfish moves and hunts in like size shoals and only the larger specimens are found living on their own. The reason “like size” fish shoal together is because a tiger will not hesitate to make a meal of a smaller version of the species if the opportunity was to present itself.

Although very little is known about the breeding patterns of the tigerfish of the upper Zambezi, it is thought to occur over the flood period when waters are the highest from March, April and May. Spawning occurs on the flooded banks of the main channel and backwaters. Fecundity is high within this species so it’s a good thing a large female can lay as much 780 000 ova. Males reach sexual maturity between the ages of 2-3 years while a breeding female will exceed 400mm.  In the first year of development a young tiger can grow as much as 160mm – 200mm, and up to 300mm in its second.

As I have been trying to drum into anybody who reads this website is the fact that the Upper Zambezi stretch between Vic falls and Katima Mulilo is a constantly changing environment. For half the year we have rising waters and for the other half we have receding, this means the tigerfish have to be constantly changing their feeding patterns to stay in line with water levels, water clarity, and the different variety of food that becomes available to them as the seasons change.

The one that got away!

Tiger fish occur in schools and are cannibalistic.  The juveniles stay close to any structures in their first year where they can take cover.  They are pelagic which means feeding and living in the top reaches of the water and going down to deeper water when light intensity increases and in the evenings.  This allows them to take cover from any predators during the warmer parts of the day and then again feeding in the late afternoon.

They are ferocious feeders, competing for food continually.  Their diet is made up of many species of fish.  Anglers have great success in using sardines, chicken hearts, and livers; in fact they eat just about anything.  They are fast learners and vary their diet considerably.  Tigers inhabit waters close to the side of the dam around suitable structures.  They are not generally open water feeders and we target them in depths from 4m – 10m.  Depending on the season, water temperatures and available food, depths vary but it is not uncommon to find them in 30m of water.

3 Tips:  The brighter the sun the brighter the lure; use shallow to medium depth lures for early morning or later afternoon fishing;  let your lure out as far as you can when trawling on a still day and close to the boat on a windy day.  When spinning, start off with a fast retrieve.  If this doesn’t work, allow the lure to drop deeper and try the same retrieve, then slow the retrieve down.  If they still don’t take, upsize or downsize the lure, and last of all change the lure.  But don’t over-fish an area, rather come back later as tiger fish are easily spooked off by too much presence.

Two important tips when tiger fishing.  WHEN TO STRIKE – free spooling is the most common tactic, but there are takes when you have to strike right away, set the hook once and allow the fish to have some drag.  If the fish is swimming away and peeling off your line, put some pressure on to keep the hook set and only re-strike when the fish has turned.

KEEP THE ROD DOWN – the whole fight the rod tip should be down.  The tiger gives you about 3 seconds before his first jump when he will take advantage of the slack in your line so automatically drop the tip.

Tiger fish are predatory fish preferring warm clear waters, aiding their hunting and feeding instincts.  The ideal times to pursue them would be most of our summer months.

WHEN TO CATCH TIGER FISH:

Firstly September through to November is their spawning months and like many other fish species, they tend to spawn in fast flowing waters up stream.

They are stimulated to breed when the temperatures go over 20 degrees and this coincides with our rains.  This is an ideal time to try and tackle the bigger spawning females on their way to their breeding sanctuaries.

December to February is when the weather is at its hottest in the area, and although fishing is still excellent, fishing days consists of short sessions being early morning and late afternoon.

From March to May tigers are generally fattening up for the winter months and also a good time of year to seek them out.

June to August also produces fish although it all depends on the climate as a drop in temperature can put them off the bite for a couple of days.

Here at Nkonkoni we support the “Catch and Release” method.

Hope this has been of some help and interest …… now to put it all in to practice……..

To many happy fishing days here at Nkonkoni………………..

In August, we pulled out a few big ones, ranging in size from 2.5kg to 5kg on Rapallas & Spoons and even a 6kg which we caught with sardines, but unfortunately didn’t capture this on camera. Now, it is September and the fish want to eat something again. September’s biggest fish thus far is 3.5kg, however, we are still catching many as they are really starting to bite now, so it is definitely a good time for fishing.

At the moment you can use bait such as sardines, chicken and liver, but I would say that sardines have proved to be the best. “Gooi” your rod and you will see what is coming in the water!
The line must be about 18 lbs which affords you the opportunity of catching 5kg’s or more. Make sure that once you catch the fish the line is loosened, so that if the fish pulls it must be free to run and the tip of the rod should point upwards. Let them run for 3 seconds and close the bail arm, which should allow you to catch it.

It is for this reason that we call our boats Shayamanzi! Because we “hit” the water…..

Weather conditions such as wind and cloud cover tend to affect fishing, but the water temperatures are rising so we are catching more fish now. Fishing is best when temperatures are more than 20ºC.

Come and fish like never before, because September is fishing season.

What are you waiting for?